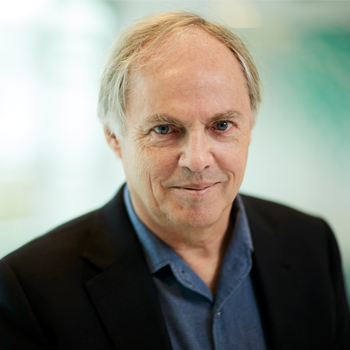 Professor of Molecular Genetics at Hubrecht Institute, Utrecht, The Netherlands and Director of the Princess Maxima Center for Pediatric Oncology; Surrozen Founder

Dr. Hans Clevers is a Professor of molecular genetics at Hubrecht Institute, Utrecht, the Netherlands and Director of the Princess Maxima Center for Pediatric Oncology. Dr. Clevers’ work originally focused on T lymphocyte transcription factors, including the cloning of Tcf1 in 1991. With the discovery that Tcf factors are the final effectors of Wnt signaling, his interests shifted to the biology of Wnt signaling. He documented the Wnt pathway as the primary driver of adult stem cells and of colon cancer.  Subsequently, he identified a series of adult tissue stem cells with the novel Lgr5 marker and developed technologies for long-term culture of these stem cells as epithelial organoids, currently the major focus of his research. Dr. Clevers has been a professor at the University of Utrecht since 1991, first in Immunology until 2002, and currently in Molecular Genetics. He completed his postdoctoral work with Cox Terhorst at the Dana-Farber Cancer Institute at Harvard University and received his M.D. and Ph.D. degrees from the University of Utrecht. Dr. Clevers has served as the Director of the Hubrecht Institute in Utrecht and as the President of the Royal Netherlands Academy of Arts and Sciences (KNAW). He is a member of the Royal Netherlands Academy of Arts and Sciences, the American Academy of Arts and Sciences, and the U.S. National Academy of Sciences. Dr. Clevers is the recipient of several awards, including the Swiss Louis Jeantet Prize, the Heineken Prize, and the Breakthrough Prize in Life Sciences. In addition, he is Chevalier de la Legion d’Honneur and Knight in the Order of the Netherlands Lion.